Weston, a suburban community, just 12 miles west of Boston, is among the most affluent towns in the state. With its excellent school system, stately homes, attractive neighborhoods and close proximity to the cultural and economic opportunities of the Boston metropolitan area, Weston is a desirable place to call home. Situated on a rugged upland plateau, early settlers in the mid-17th century established

scattered farms in Weston. By 1679, there was a saw mill, several taverns, doctors, and lawyers in town. Weston was later incorporated in 1713 and residents were prospering from traffic that passed along the Boston Post Road.

Taverns of great historic importance were established on the road. The Golden Ball Tavern, built in 1750, and the Josiah Smith Tavern, built in 1757, still exist in Weston. Later, however, this commercial activity dwindled after the 1810 completion of the Worcester Turnpike which drew commercial traffic away from Weston. Business in Weston shifted to to boot and shoe making, and the manufacturing of textile mill machinery. However, farming continued to be the local economic base. By 1870, wealthy Bostonians began constructing substantial country estates in Weston, thus establishing the town's character as a place for posh residences.

Famous architects such as McKim and Richardson designed luxurious houses in the town which saw a significant increase in development and population from 1920 to well after World War II. Weston has been committed to retaining its open space and Weston Forest \& Trails Association maintains over sixty miles of hiking and horseback riding trails. The town also has an abundance of playgrounds, ball fields, golf courses and cross-country skiing areas.

Another noteworthy initiative to keep Weston's country flavor is the non-profit organization, Lands Sake. They run the Green Power Program in contract to the Weston Conservation Commission. Green Power participants grow and raise over 30,000 pounds of fresh food for Boston area food banks. Additionally, the facility offers educational programs in ecology and sustainability.

Weston is bordered by Lincoln on the north, Waltham and Newton on the east, Wellesley on the south, Natick on the southwest, and Wayland on the west. The town which enjoys active civic participation offers its residents an array of municipal services including snow removal, a public library, police and fire protection, as well as water, waste disposal and its own school district. 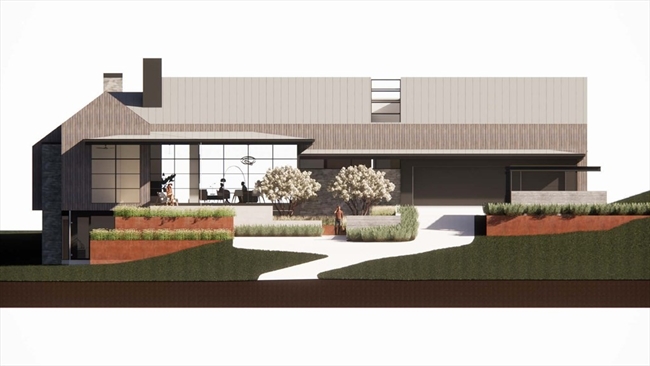 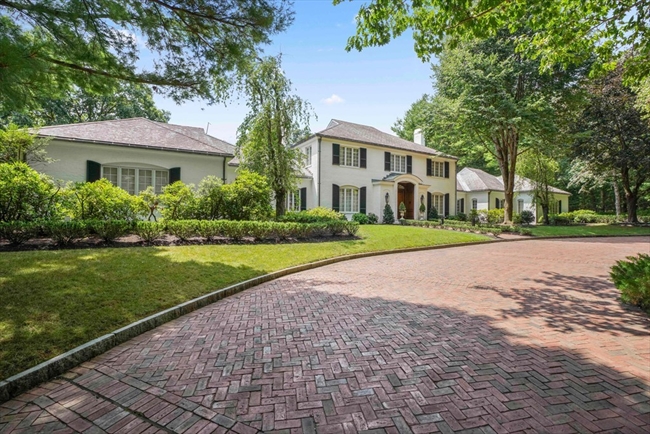 Elegance, sophistication & old world charm are just some of the captivating characteristics of this magnificent & private gated estate home. While abutting town-owned land and reservoir, this rare offering is also ideally located close to major commuter routes, including the Mass Pike, and top-rated schools. With 16 rooms, 6 bedrooms and 8 full bathrooms carefully appointed throughout this impressive estate, there is room for all, including guests and live-in help. There is no shortage of offered amenities with a stunning indoor pool/jacuzzi, two-story Family Room, Music Room, Game Room, Playroom, and an impressive Great Room, which allows your imagination to soar. With over 2,500 sq ft of opportunity, the Great Room alone offers so many possibilities. Enjoy your own private outdoor sports court & car enthusiasts can store up to 30 collector cars. With over 18,000 sq ft, nearly 6 acres of land & a premier location on a scenic road, this private estate is nothing short of exceptional. 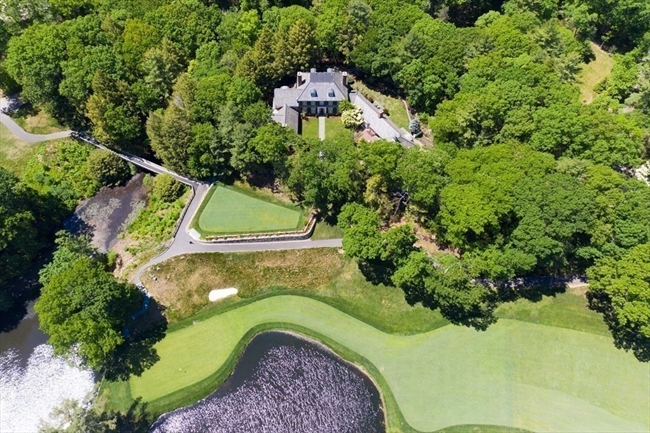 Elegantly situated in the prestigious Country Club neighborhood, this timeless estate is nestled on 2.28 acres with magical views of the Weston Golf and Country Club. This masterpiece was designed with a first floor master with a private entrance to an in-door pool. A formal library with a vaulted ceiling, fireplace and exquisite wood detail complements the master suite. Majestic archways reveal the living room that exudes style and sophistication. Multiple French doors lead to the outside gardens, patios and charming koi pond to create an ambience for ultimate entertaining, The elegant dining room with decorative hand painted walls adjoins the butler's pantry and country kitchen with soaring beamed ceilings. The second level has a guest in-law suite, sitting room and sun-lit bedrooms with custom cabinetry. After your swim, relax in the handsome club room with a fabulous bar. Luxe living at its finest with the convenience to Boston and airports 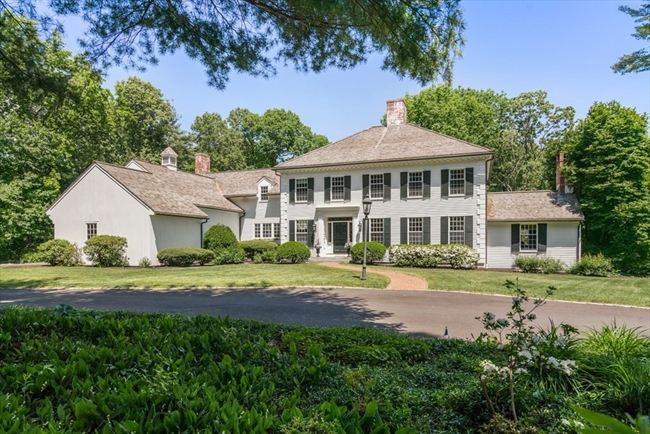 This classic and elegant Royal Barry Wills Colonial home encompassing 7,500 square feet of living area was custom built to the highest-level design aesthetic with extraordinary and timeless finishes throughout. Ideally sited on 1.4 acres of landscaped grounds and lush lawn on one of Weston's most coveted streets, this spectacular property provides a unique blend of indoor and outdoor living in any season. With sun-filled and substantial rooms throughout, the sophisticated floor plan highlights custom cabinetry and millwork and exceptional functionality. All of the entertaining spaces offer direct access to the expansive bluestone patio with views of the significant private yard well suited for a pool and tennis court. The second level features a sumptuous master suite plus four additional bedrooms. A handsome cherry paneled office with wood burning fireplace is ideal for those working from home. 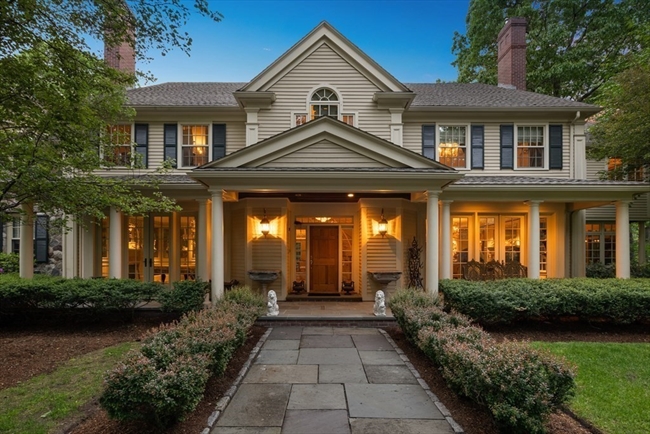 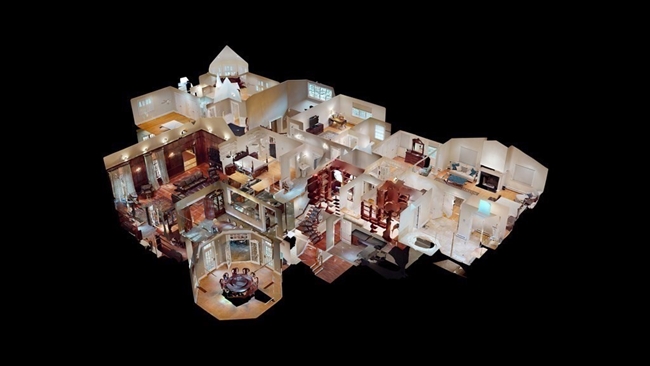 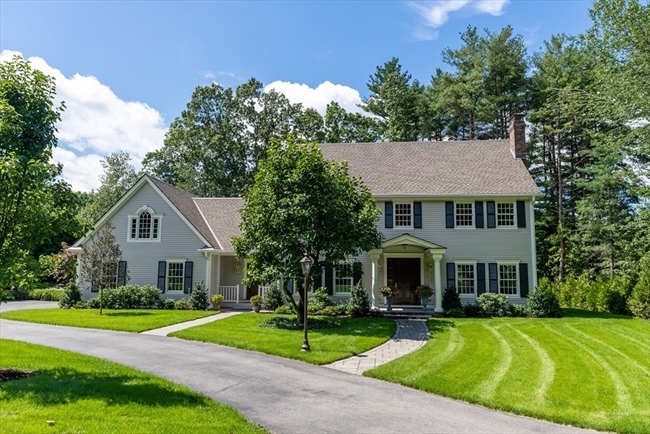 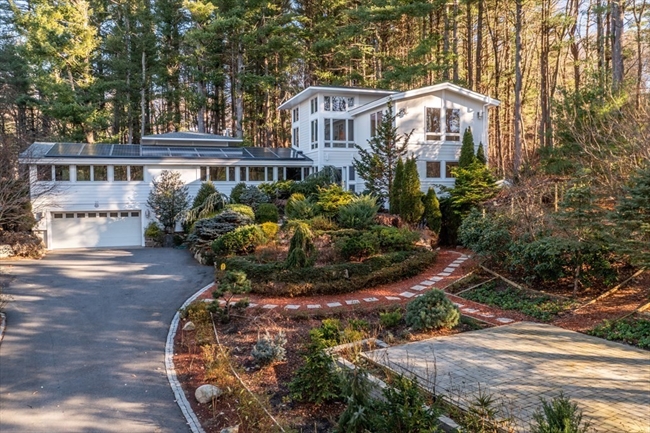 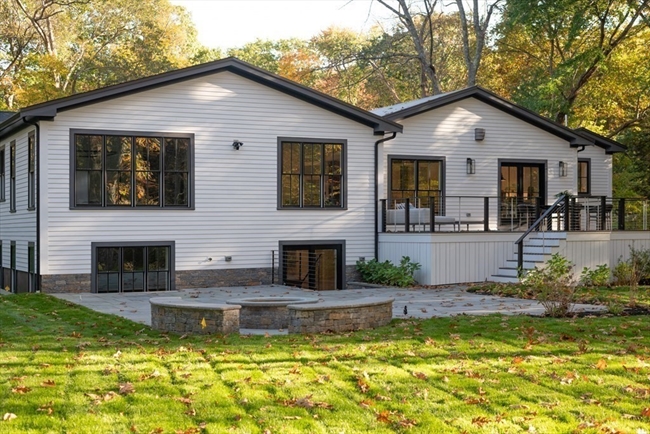 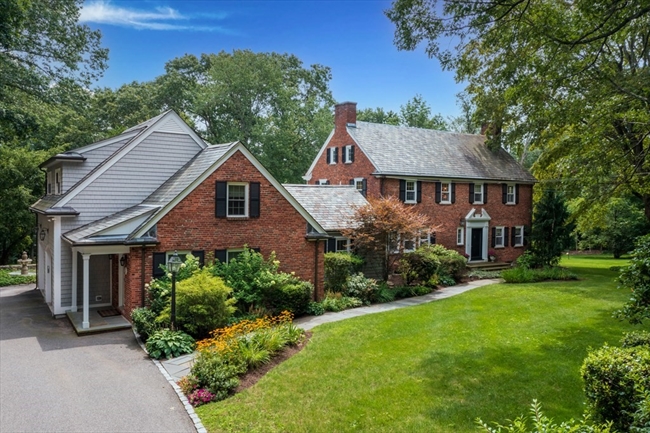 Charm, warmth and exquisite craftsmanship are the hallmarks of this classic brick front Colonial on the South Side of Weston. Enjoy the sprawling floor plan, highlighted by the inviting family room showcasing a beautiful fireplace and cathedral ceiling. Bright and open kitchen with sun-filled breakfast area opens to the large deck as well as a massive screened-in porch, overlooking the expansive grounds with lush and mature plantings for added privacy. The 2nd level has 3 generously sized bedrooms with 2 full baths, along with a beautiful suite and sitting room on the 3rd level. A stunning addition perfectly blended to complement the exterior created an oversized mudroom and the highly desirable guest suite (or second office) with a private staircase. Don't miss the original barn with remarkable space, awaiting your creative personal touch! Situated on an expansive 2.14 acre lot convenient to shops, schools, commuter rail, Mass Pike and 95.

Listed by The Shulkin Wilk Group, Traci Shulkin and Jared Wilk of Compass