With its brick townhouses and narrow streets, lined by gas lights, Beacon Hill is a quiet neighborhood shielded from the noise of traffic. Walking these streets, you are apt to imagine that you are not in the center of Boston, but on some elaborate movie set of a period film. But you are in Boston. Though only steps from Boston's Public Garden and commercial streets, Beacon Hill maintains its dignity as an artifact of the city's nineteenth century past.

It's easy to get to know your neighbors here. Besides having a well-organized neighborhood association, Beacon Hill is small, approximately one square mile, and bound by Beacon Street, Bowdoin Street, Cambridge Street and Storrow Drive. It is known for its beautiful doors, brass door knockers, decorative iron work, brick sidewalks, perpetually-burning gas lights, flowering pear trees, window boxes, and hidden gardens. Its architecture, mostly brick row houses, includes the federal, Greek revival and Victorian periods, as well as early 20th-century colonial revival homes. The architecture is protected by restrictive regulations that allow no changes to any visible part of a structure without the approval of an architectural commission.

Beacon Hill contains a South Slope, a North Slope and a Flat of the Hill. Charles Street is the neighborhoods main street and is filled with antique shops and neighborhood services. Before the American Revolution, much of what is now Beacon Hill was pasture land. John Hancock's country estate was later used to build The Massachusetts State House which sits at the top of the Hill overlooking Boston Common. The South Slope was developed in the late 18th century to make homes for many of Boston's richest family, and since then, the neighborhood has enjoyed prestige from its many notable residents.

However, for much of its history, the North Slope had a more diverse population. Small structures and alleys in this section contained the homes and businesses of former slaves, artists and seamen. Later these tenements housed immigrants from Eastern Europe and the Mediterranean. Part of the Charles River was filled in to create the Flat of the Hill. This area was populated by blacksmiths and other tradesmen. Residents of the South Slope garaged their carriages here.

Today, Beacon Hill, with its village-like charm is largely residential. Besides some small shops on the side streets, most commercial activity is centered on Cambridge Street, at the base of the hill. There are gas stations, restaurants, and a supermarket along the street. Perhaps the most widely known business in

the neighborhood is the former Bullfinch Pub at 84 Beacon Street. Immortalized on television, it is now known as Cheers. 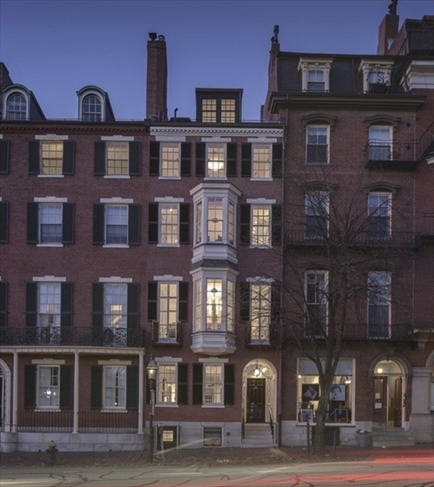 Contemporary luxury meets exceptional historic details in this Beacon Hill Townhouse! With over 5500+ sf of impeccably renovated living space with architecture, design and interiors by David Hacin + Associates, this property is in a class of its own! With a commanding presence overlooking the Boston Common and Back Bay Skyline, this home comprises 5 bedrooms and 5.5 baths and has graciously proportioned rooms that create an inviting living and entertaining environment. The kitchen and family room spaces open directly onto a spectacular deck and patio with landscaped private garden space, allowing for easy “indoor/outdoor” living. The high level of sophisticated craftsmanship, elevator, large garage (2-4 cars/storage depending on size) and intricate details throughout, make this home a rare find indeed! This home is ideally situated in the heart of Beacon Hill and is in the center of everything Boston has to offer! 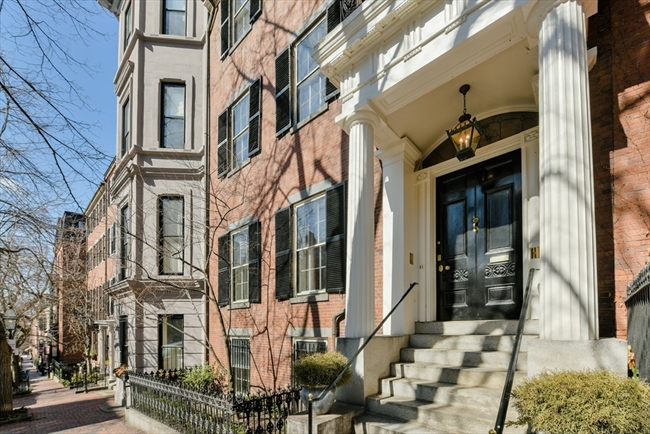 31 Chestnut Street, a classic, Greek Revival home, rich with history yet existing comfortably in Boston's 21st century, boasts an exceptionally rare combination of features and amenities that afford the owner with a stunning showplace in our City's most storied neighborhood. The main entertaining level features a grand living room offering spectacular views overlooking Chestnut Street with a glimpse to the Common and leads to a formal fireplaced dining room with adjoining Butler's Pantry. A spacious great room with a one-of-a-kind skylight/cupola opens to the home's two-tiered patio. The third floor is dedicated to the expansive master suite with walk-in closet, his and her baths and separate studies. The garden level functions as an oversized au pair suite with open living/dining area, kitchen and access to the lower level of the home's picturesque patio. Grand in every facet, this home is located steps from the shops and restaurants of Charles Street, Public Garden, and the Common. 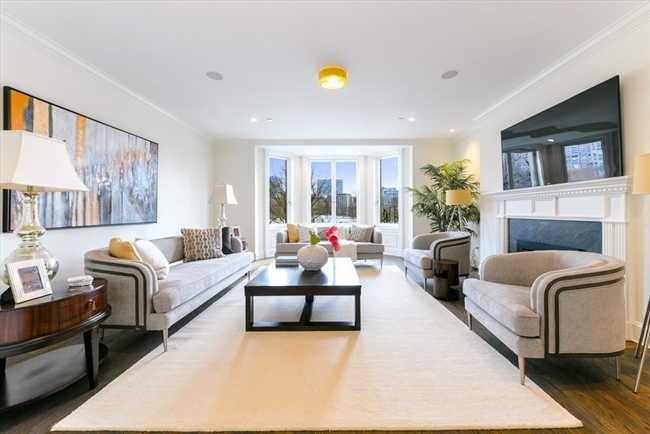 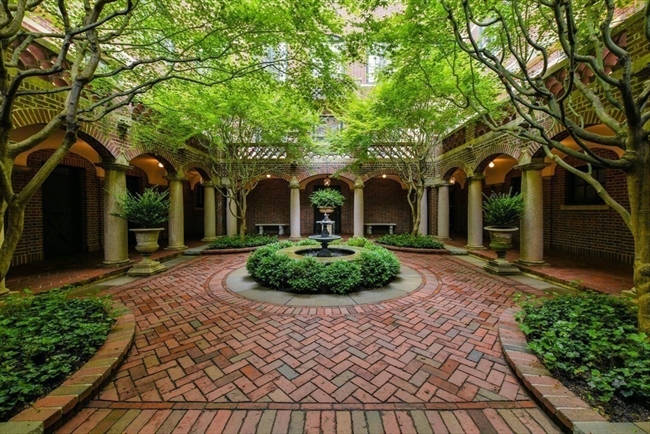 Reminiscent of a classic Venetian or Florentine palazzo, 101 Chestnut is a prized doorman building on the Flat of Beacon Hill featuring a stunning brick courtyard surrounded by an open colonnade with lush plantings, trees and central fountain. Residence R is a one-of-a-kind, newly renovated penthouse duplex with 4 beds, 4 full and 2 half baths and 3,000 SQFT. Take the elevator to the fifth floor and enter the main foyer. Just ahead is the sun-drenched living room offering high ceilings, fireplace and a Juliet balcony with French doors overlooking the courtyard. Sensational kitchen/dining area with mesmerizing views of Beacon Hill and the golden dome of the State House. There is also a library, home office, butler's pantry, and a potting room or wet bar. All bedrooms feature en suites and ample closet space. Amenities include storage room, fitness room, common roof deck and 1 Brimmer garage rental space. Steps from Charles Street, Public Garden, Boston Common and the Esplanade. 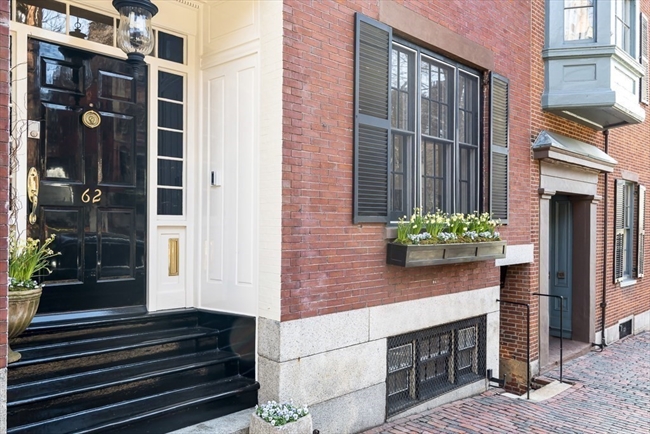 Single family living in a premier location on the south slope of Beacon Hill, just above Louisburg Square. The classic, graceful entrance leads to ample entertaining space and stunning 10 foot floor-to-ceiling glass doors overlooking the garden. The home's eat-in kitchen opens to a deck and patio nestled in an urban oasis of abutting gardens. Other key features include private work spaces, an elevator, hardwood floors with beautiful inlays, fireplaces, an exercise room with sauna, and a top floor deck with sweeping views of the city. The light-filled owners' suite has an en-suite bath with radiant floor heating, a soaking tub, double vanity, and a separate water closet. There are 3 additional bedrooms on the upper floors, each with its own bathroom. The 5th bedroom and bathroom are at the garden level, which offers a separate entrance. A parking spot at the nearby Brimmer Garage is available for separate purchase. Experience this unique opportunity to live in the heart of Beacon Hill. 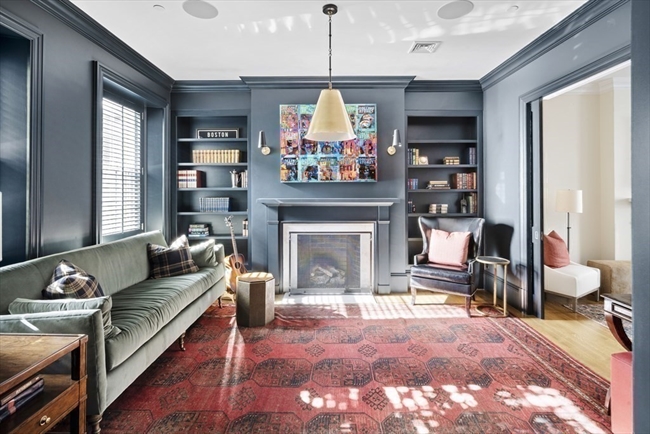 Historic architecture meets modern luxury in this 5-bedroom Beacon Hill Single Family Home which was once lived in by the famous novelist, Nathaniel Hawthorne. Exceptional attention to detail at every turn including 5 fireplaces, ornate millwork, and custom interior shutters. This home has been completely outfitted with the finest in home entertainment and designer light fixtures. The Chef's kitchen is perfect for entertaining with an island, chef grade appliances, and ample storage. Off the kitchen and dining room, you will find a charming landscaped private patio which is the perfect escape for you and your pets. On the floor above, an inviting living room opens to a magnificent library with a wet bar. From here, you will find the owner's floor which features an expansive bedroom accented by a fireplace, three windows, walk-in closet, and spa-like bathroom. Each additional bedroom features California Closet systems. The lower level doubles as an Au Pair suite or perfect home gym. Presenting Beacon Hill's newest boutique collection of luxury residences less than one block from the Boston Common. Each residence at 3 Joy has been meticulously designed to offer a classic yet contemporary aesthetic featuring graciously scaled interiors that harmoniously integrate with expansive private outdoor space. The Penthouse at 3 Joy comprises the upper 3 levels with a private elevator that provides direct access to each floor. Opulently scaled living and entertaining rooms include the bow-front formal living and dining room open to a handsome, sun-filled library. A wet bar connects to the kitchen and family room whose over-sized terrace provides a rare opportunity to enjoy indoor/outdoor Beacon Hill living. In addition to four bedrooms and three-and-a-half baths, including the master bedroom suite complete with a private terrace, the penthouse features a spacious, top-floor game room with wet bar showcasing stunning views of Back Bay. See virtual tour. 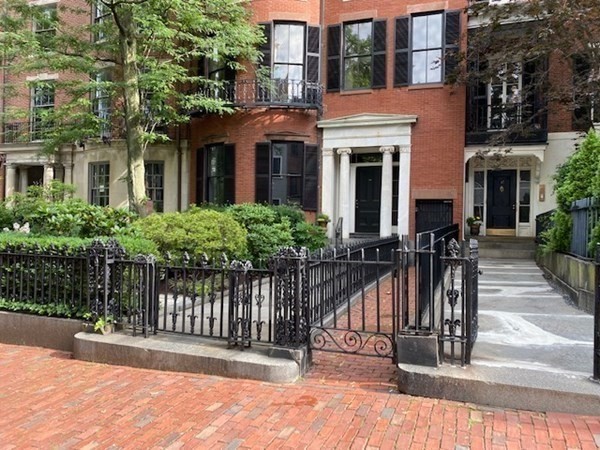 A paragon of timeless beauty with a rich heritage, this admired landmark residence built in 1837 presides atop picturesque Mount Vernon Street on the crest of Beacon Hill, benefitting from the southerly sunlight and large, lush garden that graces its grand Greek Revival frontispiece. Designed by architect Edward Shaw for prominent merchant Adam W. Thaxter, Jr., this rare jewel has been carefully restored and enhanced as a comfortably refined home of extraordinary character, notable for its splendid details and graceful ensemble of living/entertaining rooms. Striking Ionic pilasters adorn the bow-front sitting room. Other highlights include 14 fireplaces, double parlors, a dramatic curvilinear staircase, and top-floor octagonal observatory room commanding 360-degree city vistas. Opening to a captivating garden terrace, the dine-in gourmet kitchen is bright and airy below a peaked skylight. Served by an elevator, the home offers a versatile layout with the bedrooms on various levels. 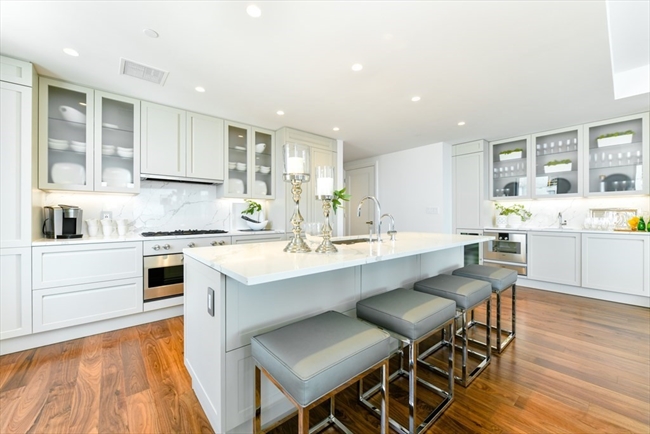 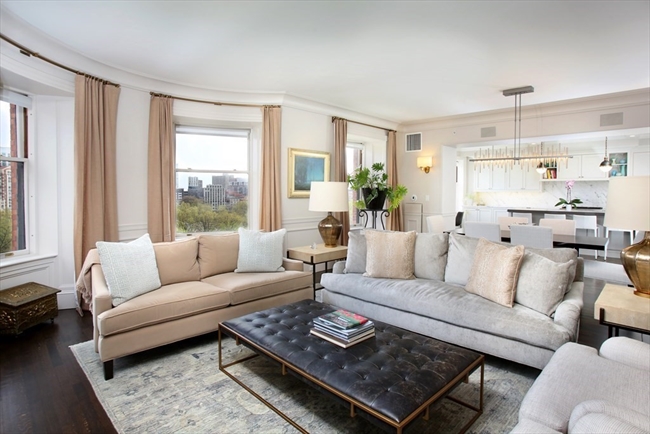 Listed by Lili Banani of Coldwell Banker Realty - Back Bay